I have been a Charmed fan for as long as I can remember. I have watched the series countless times, have all of the 90’s – 00’s tie in novels, comics and even a replica Book of Shadows. Just to put it out there yes I know there is a reboot and no I’m not a fan. I won;t get into that here.

Charmed: The War on Witches by Paul Ruditis is one of the more recent novels to come out after the comic series was started.

Blurb:
Having won the ultimate battle against the forces of darkness, Piper, Phoebe, and Paige—The Charmed Ones—are looking forward to a hard-earned, peaceful future. But when Phoebe’s former love, Cole, returns from the dead and the sisters are reunited with Prue, now imprisoned at the magical convergence between the realms, a dangerous new threat emerges.

As seemingly normal mortals violently steal the magic of witches, The Charmed Ones must shield their kind while protecting themselves from a modern-day witch hunt.

Charmed: The War on Witches continues the story of the Halliwell witches, picking up where the hit television series, Charmed, left off. With only the Book of Shadows to guide them, the Halliwell sisters are the fulfillment of their ancestor Melinda Warren’s prophecy that three sisters descending from her line would become the most powerful witches of all time. As The Charmed Ones, the sisters use the Power of Three to protect the innocent and banish evil from the Earthly realm.
Review:
While I liked the story and it had a Charmed like quality, there were a few things that irritated me.
1) Prue didn’t have any of her Prue like qualities. She was never a whinger or a woe is me kinda gal. This really irked me. Why take an established powerful independent character and make her a damsel in distress? Paul already had a great foundation to work with so I don’t really know what happened here.
2) I was hoping that Cole and Phoebe would have some kind of chemistry/altercation given their history but it was all pretty beige. Just a kiss, or a connection of any kind. They had such a searing soul consuming love – you don’t just see that person again and go hey, long time no see, hows it been?
3) I was strange to read that Piper was spending all of her time with Prue. This concept is not lost on me but given Pipers history and drive for family, normalcy and financial stability, it was odd to see her character lose sight of everything for time with Prue. Once again this was strange as it went against already established character traits.
4) Where is Leo!!! Why is he not in there more? Just why?

It’s a creative story that follows a young boy helping rid the world of dark witch magic. He is guided by a mentor who possesses an incredible book. One that makes the holder immune to magical attacks and strips witches of their powers. He lost his family to dark magic as a child and has teamed up with the boy to purge the world of evil.

This boy is joined by two others who much like him, they want to cleanse the world of evil. His rosy view is shattered when he sees his mentor pull a gun on a witch. This was not just ridding the world of evil, this seemed like vengeance.

This is happening while the Charmed ones are dealing with Prue being back as the Guardian of the All. Prue “sees” the witches being hunted and losing their powers forcing the Charmed ones to intervene.

It turns out that the boy is not actually human and is a descendant from the warlock who betrayed Melinda Warren, the beginning of the Halliwell line. His ancestor was the reason Melinda was burnt at the stake.

The mentor turns out to be a mid level demon hell bent on becoming an upper level demon. He manipulated the three young warlocks to assist him.

Cue the Charmed ones with their witchy ways of figuring out how to be in the right place at the right time to confront the big bad.
Overall it was still a good read for any Charmed fans out there looking for a new spin on an old favourite. While this isn’t the exact style of the previous books and show it’s still a far better option then Charmed reboot. If you have the option between this and the tie in novels from the 90’s/00’s – go for the tie in novels. They are consistent with character traits and established plots.

Have a fabulous day!
Kimberley xx 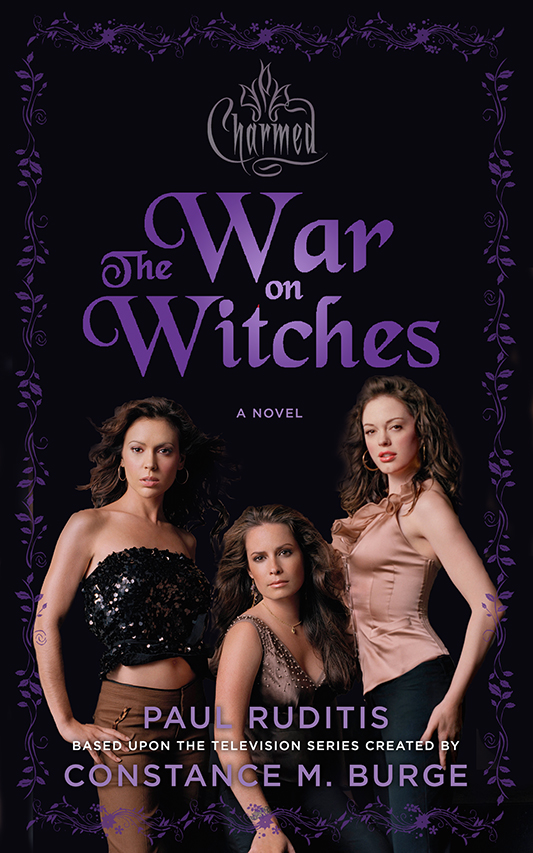 One thought on “Charmed: The War on Witches by Paul Ruditis”

💛TOLKIEN BOX SET GIVEAWAY💛
Would you rather your favourite series adapted into a movie or tv show?
Have you read a murder mystery?
Do you like books with magic in it?
Is there a new release that you have been eyeing off? Is it one of these amazing books? With so many gorgeous books coming out soon, why not celebrate with a giveaway!!!
Are you on any other social media platforms?
You're sucked into a book! Your battery percentage tells us the part you play, what's yours?
Do you prefer decorative or simple book spines?
What was the first book/series you read by Cassandra Clare?
Do you have one favourite colour or does it change?
What was your favourite fairytale growing up and is it the same now?
Would you rather have dinner with your favorite author or your favorite character?
Colin wants to know which of these Rainbow Fairy books has your favourite spine design?
You're sucked into a book! Your battery percentage tells us your pet sidekick, what's yours?
What book has been on you “to be read” list for far too long?
Are you a @therealsjmaas fan? Do you prefer the Throne of Glass or the A Court of Thorns and Roses series?
What are you currently reading?
Do you have a favourite Cassie Clare series?

Blog posts you may have missed